Some people expect nothingness after death; others envision “moving on” to their picturesque version of an afterlife. To the chagrin of Claire, the protagonist in Fat Turtle Theatre Company’s production of “Letters Sent,” her “afterlife” ends up being her mother’s spare room.

“Letters Sent” follows Claire as she strives to rebuild her life after a failed suicide attempt. We watch as she moves back in with her mother, attends therapy seasons and reconnects with distant family and friends.

It’s an emotional performance. I could feel Claire’s anger, shame and guilt from the stories onset, and I enjoyed seeing the walls she built around herself dismantle as she found small moments of joy and hope in her everyday life. When she confided in her therapist or became excited to see her father I knew that she was slowly overcoming her depression. 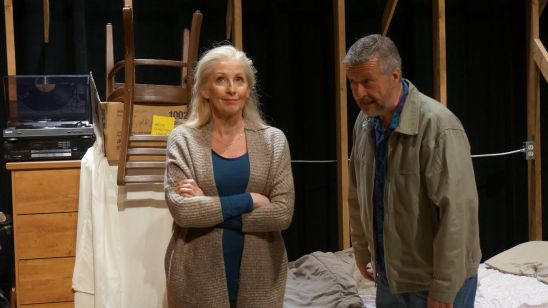 My only critique of the script would be that some characters weren’t extremely fleshed out. For example, at the end of the play we learn Claire’s boyfriend will likely become a huge part of her recovery process, but he didn’t get enough time on stage for me to connect with his character in any meaningful way. I found myself wishing her two best friends would be the ones to play that role in her life because I had the chance to see the sincerity of their love and support for Claire during the play. I also felt Claire was quick to trust her estranged father when he suddenly appeared in her life again.

While the play tackles a serious subject matter, it had its lighter moments sprinkled throughout. I enjoyed Claire’s scenes with her high school friends, and I got a kick out of watching her smoke pot with her dad. To that note, my favorite aspect of “Letters Sent” is its emphasis on the importance of community when facing mental health issues. We live in an era that emphasizes self-cafe and self-love to such an extreme degree that it often morphs into an exaggerated model of self-reliance. “Letters Sent” is a timely reminder that sometimes you’ll need the support of friends, family and yes, even a trained therapist, to help you during the process of healing. I think this is a message all people should take note of, regardless of their current state of mental health.

Need more arts in Indianapolis? Take a look at our list of things to do with creative kids or spend the day at one of Indy’s best museums.

Want to write for Heartbeat Indy or know of an event that you think we should cover? Email heartbeatindy@gmail.com.