BY LINDSAY @ THE LOVE BUNGALOW, shared with permission.

It’s donut time, friends! And I’m excited to fill you in on the new trend that is sweeping Indianapolis and probably your city too. Donuts (or doughnuts, if you prefer) have been back in style for a couple of years now, showing up in wedding displays and adorable shops filled with all the hipster toppings that you could ever imagine. But now, you can get in on the creation of your breakfast and put your design skills to good use. Because custom donut shops are the latest craze and just like the cupcake shops of 2008, I expect we’ll see many more similar stores pop up before people get tired of the fad and go back to eating kale. 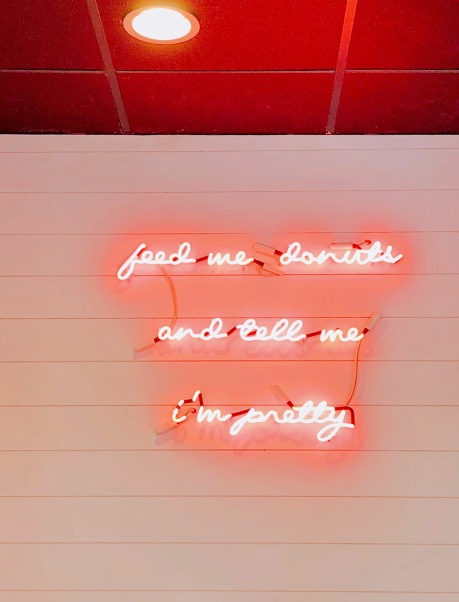 The concept is pretty simple: the stores just make one flavor of a vanilla cake donut, but then let you fill out a piece of paper with options for icing, toppings, and drizzle for each individual donut. No two donuts have to be the same and you can try a mash-up of everything good in the word. Donuts are the only thing on the menu, unless you want a cup of coffee or a glass of milk. There’s not much else to do in the store besides fill out your paper and eat your donut, so it makes for a pretty quick trip. And they are pretty affordable! They are smaller than my fancy donut shop in my neighborhood, but they are also 1/2 the price (around $1.50 each). They are served on a paper plate, though, which takes away from some of their photogenic quality.I tried the Donut Refinery in Carmel first. They have an adorable interior with custom lighting effects, cute signage, and friendly service. I like anything with sprinkles, so I definitely had to order some rainbow toppings. The thing I liked about this stop is that the donuts are made fresh while you wait, so everything is nice and hot.Then a couple weeks later, the Donut Experiment opened just a couple streets away from my house in the Glendale shopping center. I went all out on my donut with caramel frosting, sea salt topping, and peanut butter drizzle. This was definitely my favorite topping combo and I would go back again just to order the same goodness. Husband’s donut also looked pretty good with some maple frosting and bacon topping. The interior was OK, but pretty basic and lacked the charm of the Donut Refinery.

I like the idea of creating my own flavor combos and think this new donut craze would be SUCH a fun thing to do with kids. However, I need a little more than just a vanilla cake donut for breakfast and wish I could also order a side of eggs or some bacon. Husband was definitely still hungry after two small doughnuts and asked to get a sandwich after our visit. The interiors give the vibe that this is not a place to linger, but the donuts are also better when they are hot and fresh, so it’s a bit of a toss up to decide where to eat them.