Skip to content
Date: March 15, 2019Author: keshiamcentire 0 Comments
By Erin in Indy,
I feel like it is my civic duty to inform you all about Cholita’s Sunday brunch. It’s $15 and it’s all you can eat. And it’s not a buffet, but you order off the menu. It is a different menu than their usual one, and actually it has even more choices. I have been twice already and have tried a lot of different things because both times I was with several people.
They have some drink specials including several flavors of mimosas ($10). The first time I tried the passionfruit mimosa, but I stuck with margaritas after that. The mimosa was mostly just a glass of sparkling wine with some passion fruit syrup that sort of sunk to the bottom and never really mixed in well. Their margaritas are quite good though. 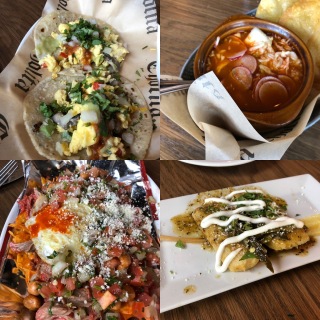 As far as the food goes, it was mostly all good, and some things were exceptional. My favorites are probably the chilaquiles and the tlayuda. The chilaquiles are made with nacho cheese Doritos and they served them in the split open bag—the chips at the bottom with cheese, bbq carnitas, boiled peanuts, pico de gallo and a fried egg. This was a popular choice at the table– hubby especially liked it. It is definitely on my must-order list here. The tlayuda is a good thing to split with a group, otherwise it might fill you up too fast because it is big. It’s like a Mexican-style pizza—the crust is a giant crispy tostada topped with cheese, seasoned ground chorizo, scrambled eggs, beans, crema, salsa verde and pico. It’s really tasty. The first time I had it, I brought leftovers home to hubby and my son and they ate it immediately. A good mix of various flavors. And if you order a side of guacamole (it’s $8 though, not included in the all you can eat price), you can put some of that on top too.
Speaking of guacamole, they have certainly improved it since my first visit. I felt like there wasn’t a lot of it when we went the first time and that it was mainly a lot of pico. But now it feels like you are getting a full serving of it. You can get chips and salsa as part of the $15 and their salsa is good. It is fire-roasted and has that deeper flavor that comes from roasting the tomatoes and peppers. I recommend getting some to add to various other dishes as well. They serve those homemade fried flour tortilla chips, which I particularly like, even if they are a tiny bit greasy.

Hubby loved the bacon wrapped hotdog, which basically comes served as 2 tacos with the hotdog, beans, cheese, egg, guac, pico and hot sauce. I will admit, it was pretty darn tasty and not something I would typically order. It had a nice breakfast flavor with the eggs, bacon and pork. If you like sweets for brunch, the chocolate waffle is darn good as well. I had to be forced to take a bite because I usually avoid sweets for brunch, but I was really glad I did—it is really rich and chocolatey, with just a little bit of spice in it. It has dulce de leche, vanilla custard and banana with it. A great combo. They should add this to their dinner menu for dessert. You can also get churros, and they were better the two times I had them as part of brunch then the first time we had them for dinner. I think they have perfected the fry time on them and they are crisp outside but still slightly soft inside. And they have caramel and chocolate drizzle underneath.
Back to savory though, I also enjoyed the pozole soup much more than I thought I would—the spicy chile broth was so tasty—it has a smokiness to it and a depth of flavor that was really spicy, but not hot spicy. There is chicken, hominy, cabbage and radish in there too. And they serve it with big fried tortillas. Seriously something I wouldn’t have probably tried but was glad I did (and it was thanks to our server who brought it when we told her to surprise us with a couple of things). The other thing she brought us was the drowned eggs, which I have now had both times. These were poached eggs cooked in tomato chipotle salsa with chiles, cheese and crema. I liked this as a very flavorful option with less carbs than most other things. You really got the smoky flavor from the salsa and they know how to poach an egg here. They were all just right.
There was also a poached egg on the carnitas gorditas, which were pieces of masa cakes with beans, cheese and some sliced avocado. There was a verde hollandaise as well. It was sort of their version of an eggs benedict. I liked the flavors here, and again a nicely cooked egg. This was one I was torn on– the masa cakes were strangely hard to cut, but you could bite through them. The flavors were good, but they were just maybe one of the weaker choices.

I also tried the chicken and cactus and egg tacos. Both are good, especially with some of the salsa on top, although compared to the rest of the things, they are maybe slightly less exciting. The only thing I had that I just did not like were the tamales. They are pretty dry. They do have various sauces drizzled on top, but it isn’t enough to make up for the dense dry interior.
Overall, this is one of the better brunch options in town. You can try all kinds of tasty treats. And the drinks are nice too. For $15 you can eat as much as you want, and the food is freshly made. Let me know what you think if you have been. There are still a few items I haven’t tried…
Cholita
1001 Broad Ripple Ave
Indy  46220
317/389-5555
www.cholitatacos.com
Want more brunch spots? Enjoy a classic breakfast made to perfection at Hotcakes or dive into Mexican-inspired eats at Biscuits.
This story was originally posted at indyrestaurantscene.blogspot.com, shared with permission.
Want to write for Heartbeat Indy or know of an event that you think we should cover? Email heartbeatindy@gmail.com.
39.869550 -86.141508
1001 Broad Ripple Ave, Indianapolis, IN 46220, USA